After a good meal and a good pipe

Borkum Riff. About once a year, I'll catch the distinctive smell of whiskey-soaked pipe tobacco, and for a moment I turn to look for my dad. When I do, I look up, because I'm six years old: my dad hasn't smoked since the 1970's. But that smell, of tobacco and sweet cream, was such a constant part of my childhood that it's burnt into my memory so deeply it would take a pipe cleaner to remove it from my hippocampus.
Whenever this happens I don't really know how to feel. On the one hand, it's a smell that never fails to transport me to my youth. On the other, my dad quit smoking after I had a long outburst telling him with all the earnestness of a child that I hated the fact that he smoked and that it gave me headaches and that I was sure it was going to kill him and I wouldn't have a father. I remember that I couldn't stop shivering for hours from the emotional surge. I am, of course, very glad that my father did stop smoking, as he's still with us today.

And yet. My father owned several pipes and they were all beautiful. He had curved rose-colored pipes made of burls (cherrywood? walnut?) that looked wise and mysterious, he had sharp-angled black pipes that looked like they belonged to Mr. Fantastic. He even had a corn-cob pipe that was hokey and wonderful. He had pipe tools for tamping and scraping and cleaning and a carousel that he kept his pipe in. And he had tins of tobacco with pictures of three-masted ships and peculiar European men and maps of the world on them. And when he read the Hobbit to my brother Robert and me and he got to the part about Gandalf and Thorin blowing magical smoke rings I knew exactly how that must have looked.


My ambivalence about pipes can be summed up nicely by Curious George. In the original H.A. Rey book from 1941, the monkey George is unceremoniously removed from the jungle by the Man in the Yellow Hat for sale to a zoo; Upon arrival in America, he spends what is supposed to be his last night of freedom in the Man's home, where we are told After a good meal and a good pipe, George was tired." 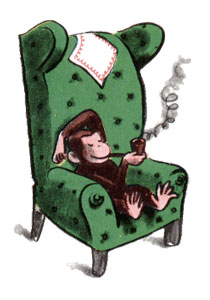 When my kids were little, they constantly watched a VHS recording of the 1982 stop-motion version of Curious George, which faithfully stuck to the text of Rey's book and did in fact show George enjoying his pipe; however, immediately after George takes a couple of puffs the film shows George becoming ill and the Man in the Yellow Hat guiltily putting the pipe away—presumably shamed into quitting himself. And this part always made me very, very angry. Why? Why the need to editorialize? Children already know that George is doing something wrong, something forbidden. That's what makes it fun. And Dad, I'm glad you stopped smoking. But I hope you can still find something wrong to do now and then.