I attended Eureka High School, Community Unit School District 140, in Eureka, Illinois from 1982 to 1986. My best subjects were math, French, art, history, and music, but there's one thing I learned while I was there that has stuck with me more than any other piece of knowledge: there was a door on the far left of the front of the building that, if you pulled on the handle firmly and gave the base a swift kick, would pop open every time, allowing you entry after the building was closed at 4:00.

On its own, this piece of information was not that useful—after all, who wanted to be in the school any more than you had to? But with the knowledge of this exploit came a host of implications. The person who showed me this trick was a dedicated student, a good kid. So I learned that good people break rules. If you were going to use this technique you still had to do it in plain sight. So I learned that you can get away with things if you act like you're supposed to be doing them. As time went on, I slowly came to learn that nearly everyone knew about the door, probably even most of the teachers. So I learned what an open secret was, and how all communities have them.

In academic circles the phrase for this sort of thing is a "teachable moment." Often the most important educational moments are unplanned. They arise organically from life experience and deal with large issues: How do you deal with failure? With adversity? Where do you draw a moral line? What's the right thing to do?

I thought about this yesterday when my brother, who also attended Eureka High School and who now writes for the Daily Show, Facebooked a link to a story about a teacher at EHS being suspended for showing segments of Jon Stewart's show to his government and law class. It's unclear what specifically happened because the article is so awful, but I suspect that the teacher warned his students against Googling "Santorum" and some of the district's parents—those lacking a sense of humor—were upset. That piece of information might have been helpful for readers trying to understand the the article, but the Pantagraph reporter did, however, note the teacher's salary, so we could all be incensed by what a boondoggle public education is.

Amidst the predictable comments on the article pages supporting freedom of expression and deploring the teacher's alleged bias, this one, from "teach78" stood out:


Spin it anyway you want; there is no educational "value" in the Daily Show.

teach78 is probably right about this, but there is plenty of educational value in how District 140 dealt with the situation. The best way to handle things is not through private negotiations but through public fiat. A parent's sense of indignation is more important than a man's occupation. Pick the right side or you will be dealt with. These are the lessons that Eureka students will take from this event, and they might stick with them longer than a faulty door.

Email ThisBlogThis!Share to TwitterShare to FacebookShare to Pinterest
Labels: Eureka, exploiting my youth, The Daily Show

This is the amount of energy (B) has left over 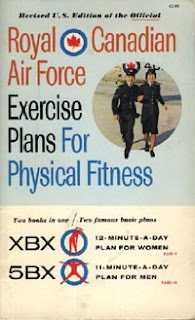 When I was a kid the second-most fascinating book on my parents' shelves was the small pamphlet whose  prosaic title was "Revised U.S. Edition of the Official Royal Canadian Air Force Exercise Plans For Physical Fitness" (underline original). The cover depicts a pair of smiling Canucks in uniform striding across the tarmac away from their plane, presumably back from a long day of protecting Kapuskasing from bogeys. This book was actually "two books in one" as it contained both the official RCA exercise regimen for men and women. For some reason, the women's plan was a minute longer a day at 12 minutes to the men's 11, but still, such a deal.

I'm really not joking when I say this book held a strange fascination for me. There was something oddly authoritative about this being the actual regimen for a military service with the word "Royal" right there in its name. It claimed to be all you needed to achieve fitness, and as a chubby little nerd I believed it. I've always been a sucker for claims of expertise as well as for things that are short. Because I am gullible and I am lazy. But I was not alone in my interest in the program; 5BX was a big hit in the 1960s and the promotion of regular, intensive calisthenics paved the way for the aerobic craze of the 1970s.

Looking at the book today (I found a PDF of the 5BX pamphlet which was originally published on its own) what I'm most captivated by are not the exercises—a series of standards, some of which are neither effective nor safe—but the lengthy introduction which makes the case for physical fitness. Of the original 32 pages only 10 actually described the exercises; the rest were a series of cartoons, charts, and pep-talk to convince the sluggard to adopt this life-changing process.

And what wonderful bullshit they are! Beautiful examples of how graphics can skirt around meaning and imply that information is being given, without actually saying anything. My favorite is the following chart on page 7: 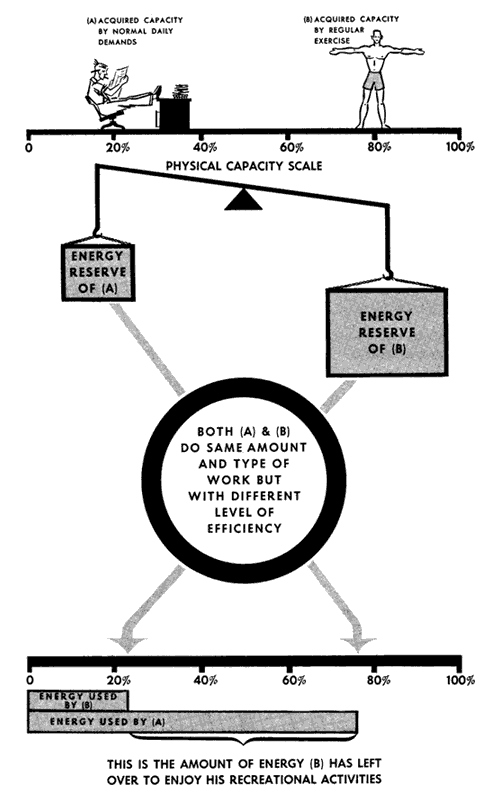 So much quantitative data is implied; none given. Look at that physical capacity scale, presented in authoritative percentiles. What is it? I don't know, but that guy slouching at the desk sure doesn't have any. Look at how much heavier the shirtless guy's energy reserve is! More energy weighs more. And don't you want to have more so you can enjoy your recreational activities? Activities like 5BX?