That's Why They Call you Rubberhead

You may not have noticed, but over Thanksgiving there were a lot of online sales. One of these led me to notice a new compilation of old Casper comics from the improbably named publisher American Mythology, whose business model appears to be licensing properties from your childhood, assuming you're 50 years old or more. Since I read a metric ton of Harvey Comics when I was a child, and since I have largely forgotten about them since I was ten, and since it was on sale for Black Friday BUY NOW, I bought it. 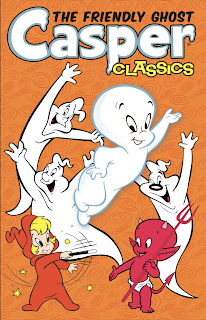 In ye olden days, comics were sold in groceries, pharmacies, and even hardware stores as point-of-purchase impulse buys to keep the kids amused. This was the age of the Hey Kids, Comics! wire display, and in addition to Marvel and D.C. there were Archie, Harvey, Gold Key, Charlton, and probably others who came and went in the mix. The advent of a direct market for comics—e.g., comics / ephemera shops and dedicated sections in bookstores, was a bonanza for superhero publishers and a boon for the indie publishers I fell in love with, but it spelled the end for many publishers of kids' stuff. Only Archie survived, and mostly through its digest-sized books that fit comfortably in grocery checkouts between copies of Prevention.

Harvey Comics was very much a creature of its time, founded upon licensed characters, drawing into its fold properties as disparate as the slinky 1940's spy heroine Black Cat (not to be confused with Black Cat) and the WWII humor-in-uniform comic Sad Sack, along with Casper, who was already famous for his Paramount cartoon series before becoming the flagship title for Harvey. Eventually the character of Richie Rich would be originated for the company by cartoonist Warren Kremer, whose bulbous forms and supple ink lines defined the Harvey "look," although sadly he was uncredited in the comics, as was the policy for most companies at the time. It gives me pause to think of the nameless artists who passed through Harvey, required to sublimate their styles into Kremer's. A few would gain recognition—such as the remarkable Ernie Colón, whose career spanned from Richie Rich to Eerie to Battlestar Galactica to "adult" comics for Epic Illustrated.

The table of contents for this collection credits Kremer and Howie Post for the stories, although I suspect that there were other hands involved in some of the pieces. It would be nice to have a listing of the original publication dates and titles, but this is definitely a no-corners-uncut production. The art seems to have been scanned from printed comics, with all the smudgy lines and splotchy Ben-Day dots on proud display, then had its whites blown out and its colors saturated in Photoshop. From the style and printing quality these stories appear to be from the 60s and/or 70s. While the academic in me is disappointed, in an odd way this presentation is true to its source material: Harvey would often reprint and repackage segments, never giving credit, and since the stories were entirely stand-alone and the style was homogenous, and they were for kids anyway, who cares? 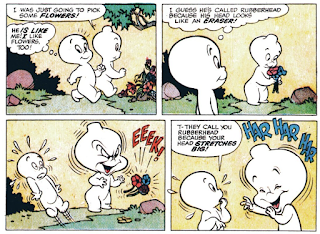 This is a long way to go to say that when I actually read the stories I was not prepared for how weird and confusing they would be. For the uninitiated, Casper is a Good Little ghost, which means he is nice in vague ways to the forest creatures he hangs out with. However, ghost culture seems entirely based upon scaring humans by yelling "boo!" at them, a pastime Casper wants no part of. For no good reason, he hangs around with a group of mean ghosts called the Ghostly Trio and tries to convince them of the error of their ways. It's unclear what's at stake for any of these characters: Casper's philanthropy never extends to actually effecting change in his bucolic world. The other ghosts laugh with delight at startling people and animals but they don't seem broken up when foiled in their attempts. In the absence of plot, Casper floats (sometimes literally) from one scene to the next. Sometimes there are gags, sometimes there aren't. In one three-part story Casper tries to find another ghost who shares his milquetoast sensibilities. His cousin, Rubberhead, appears for no particular reason. Casper is happy that two share a resemblance but then Rubberhead uses his "power" (the ability to enlarge his head) (?) to scare a bouquet of flowers. One might think being picked would be enough to terrorize them—not to mention kill them—but it's the head trick that makes them shriek (?).  Throughout these stories, the only thing resembling motivation is the "bad" ghosts' desire to scare; Casper, his pal Wendy, and everyone else seem content to wander from panel to panel, devoid of purpose or reflection. In general, the Harvey characters were defined by a single personality trait, with Casper being "good" and Richie being "rich" and Little Dot being "obsessed with dots." This one-track characterization would eventually be brilliantly satirized by Dan Clowes in his story "Playful Obsession" (Eightball #5, 1992). 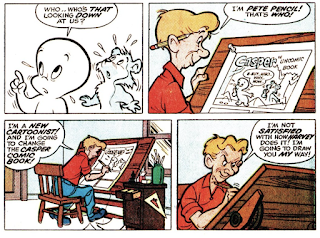 One story stuck out to me for its metatextuality. In this story, Casper and his bear cub companion become aware that they are being drawn in a comic by the artist Pete Pencil, who expresses distaste for having to draw comics the way "Harvey" wants them drawn. In this story, Harvey is presented as an avuncular bespectacled man who hangs with forest creatures in his spare time, and he is summoned by Casper to re-assert order. But my heart goes out to Pete, who I can't help but see as a stand-in for all the frustrated artists being paid a pittance to draw in the house style. Many cartoonists of the postwar era were immigrants or from immigrant families, and artists had to take whatever terms they were given.

There is stuff from childhood that can be revisited fruitfully as an adult, augmented by years of experience and sophistication: the books of E.B. White or Laura Ingalls Wilder, for a couple of obvious examples. Then there are those things (such as these comics) that upon examination are far less than what you remembered them being. They are the stories and characters that happened to be available when you were six, whose worlds and lore were magnified by your youthful enthusiasm. Harvey Comics were, in one sense, pretty terrible. But that doesn't mean they can't be read with enjoyment today. They offer a glimpse into a world of journeyman artists churning out gags for an audience of children not yet served by electronic media. They are also, as the Firesign Theatre would say, weird with a beard.
0 comments

The new Coen Brothers film The Ballad of Buster Scruggs features an impressive cast, but for me the true star of this anthology is the prop book used to join these violent, nihilistic western stories together. 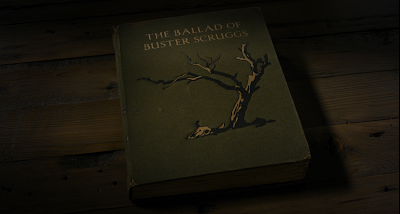 The book is presented as cloth-bound with an embossed cover. Cloth binding was developed in the 1820s and by the 1830s embossing was developed, leading to increasingly ornate treatments and eventually to foil-stamping, The understated, two-color printing marks this as a humbler work for a popular audience. I can't place the typeface, but it looks quite a bit like Weiss (1928), which in turn was based on Italian Renaissance printer's faces. The bold, simple design of the cover illustration brings to mind book designs from the 1910's and 1920's, which was also a popular time for western literature, which had its major flowering of popularity with the publication of Owen Wister's The Virginian (1902). 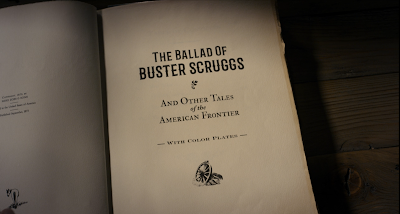 Which makes it a bit surprising that the front matter dates the book to September, 1873. The decision seems to have been to want to locate the fictional book closer to the events it depicts, which seem to be in the 1840s (particularly in reference to the Gold Rush and the Oregon Trail). But there are many details to the book which would make it an artifact of the turn of the century or even later. The barred "western" typeface used for the title here appears to be Barbaro Roman, a contemporary face mimicking Victorian sources. The type shows a slight embossing, which is the sign of letterpress, or movable type. But overall the title page "feels" contemporary rather than historic. The leading (space between lines of text) is much tighter than a 19th century source would be. The text is sized subtly as in the slightly smaller "THE BALLAD OF" and the slightly larger "BUSTER SCRUGGS"; an actual 19th century printer would not have such a collection of font sizes in metal, particularly for a display face. 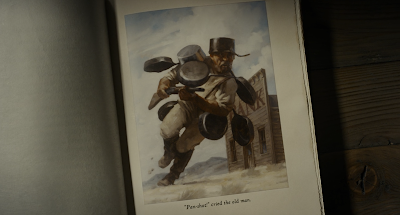 The color plates are the perhaps the most remarkable feature of the prop. Color lithography had been used to decorate letterpress books since the late 18th century, but it became more popular in the late 19th. These images had to be printed separately and were much more fragile than the letterpress pages, and so required protective sheets of onionskin or glassine to keep the ink from rubbing off. The illustrations in the prop book evoke the Brandywine School of illustration, named after the artists' colony founded by Howard Pyle in 1895. It was to this school that illustrator N.C. Wyeth belonged, whose famous illustrations for Treasure Island (1911) and The Boy's King Arthur (1922) set the tone for lush illustrations of adventure for decades to come. It's these illustrations that would lead me to guess the book was a product of the 1910's or the 1920's if we were not given a "copyright." 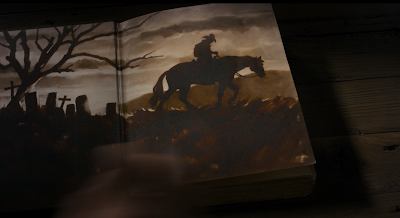 Even more anachronistic are the illustrated endpapers, rendered in a watercolor style that strikes me as more 1950's or even 1960's. But I don't know as much about the history of these. Perhaps a reader of this essay with more information than I have could chime in with their assessment? 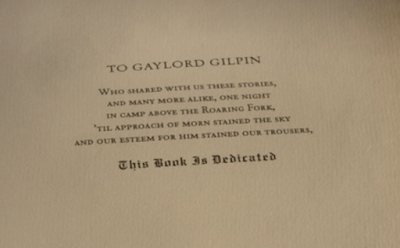 Finally, I have nothing historical to say about the book's dedication, except that I'm sure there's a story here somewhere.
0 comments